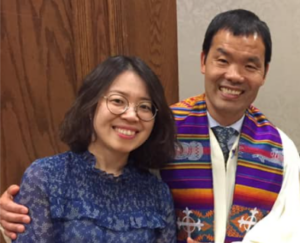 The Rev. Eun Sik (Cloud) Poy has been appointed to Carleton United Methodist Church effective July 1st.   He comes from the Boyne City area of Michigan.

Cloud (Eun Sik Poy) went to the Philippines on a short-term mission while studying Theology at the Central Theological School in Seoul, Korea. He then answered a call to pastoral ministry and decided to do higher theological education and moved to the United States.

He studied Theology at God’s Bible School in Cincinnati, Ohio, for his Bachelor’s degree. He then went to Asbury Seminary to study missiology; however, he transferred from missiology to Master of Divinity because he believed that would be the groundwork for mission work.  After graduation, he was commissioned by the United Methodist Church as a pastor, and he is now working in at a church in Northern Michigan.

Rev. Cloud is interested in Multi-Ethnic ministry based on his concern as a Korean pastor at American churches. He is currently studying for his doctorate degree (D. Min) at Talbot School of Theology at Biola University in California.